Craft in America- a DVD Review

Crafting has a long history- some even say we have it hotwired in our brains to create.  But our yearning to create with just the right bead, the prefect fabric, or that found object comes from a movement that began with the Industrial Revolution.  Just because something could be made quickly and cheaply with the aid of mechanics did not make it necessarily better or desirable.  The Arts and Crafts Movement was a response to mass-produced objects, and even though the Movement itself dies out in the 30's, it's influence lingers today. 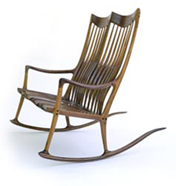 The first episode on the DVD is entitled "Memory," and focuses on the historical ties some contemporary arts and crafts come with.  various artists discuss their works, but my favorite sequence focuses on a woman whose family has historically made baskets.  Originally from Africa, her slave predecessors found native plants and bushes whose leaves and needles resembled those from their native land.  Mothers passed their knowledge down to their daughters and now the featured artist not only can make utilitarian baskets but also has added her own twist to make baskets beautiful enough to be considered art. 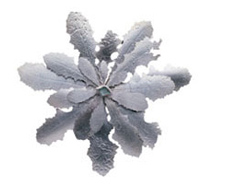 The second episode is entitled "Landscape," and focuses on how the area that you live in can influence your art.  The featured Southwestern artist gets inspiration from the stark landscape of the desert, and uses both metalwork and lapidary skills to create brooches evoking his homeland.  Interestingly enough his delicate jewelry pieces have ceased to be enough for him, and he segues into how he is making larger and larger sculptures out of metal. 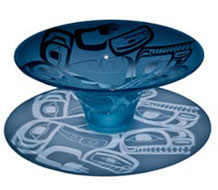 The third episode, entitled "Community," focuses on how craftwork can both involve and create a community of people.  My favorite segment is about quilting, but quilting in an area of the Southern US where race relations still boil.  The quilting bee, for them, is one of the few places where women of different races, in their small town, can come together and just be.  The segment evolves as the idea of "quilt" as community maker grows into a discussion on the AIDS quilt.

Although the Arts and Craft Movement had greater political and philosophical components, the idea that we have a great love for hand-crafted, well-made objects and that we need creative people to make those objects has given rise to every flea market, street fair, and artists' alley.  Perhaps the economy and today's hard times has brought people back into the arts and crafts fold. In any case, I can't wait to check out season 2 of Craft in America, and season 4 is underway to debut on PBS later this year.
at 5:49 PM No comments:

Hello Everyone! This week is when we have our monthly craft night at Dancing Bear Indian Trader, on Tuesday 4/24. The store location is 1016 West Valley Parkway, Escondido, CA 92025. The phone number is 760-747-2323, and we will have our craft night from 7-9pm. This month we will have the CD photo cube box project. Please bring 4 photos, or collages in a 4.25"x 4.25". This project is free and it's fun to do. We have a bunch of CD cases. So don't worry about raiding your collection. Please RSVP for craft night at craftnight@sandiegonorthparkcraftmafia.com

Horror Movie Monster Fabric, our friends at Belle Pepper Fabrics is getting in a fresh shipment of the 50's horror movie poster artwork fabric that has been extremely popular. If you like it, be sure to get some soon, our source tells us that the fabric sells out really fast. Here's their website: http://www.bellepepperfabrics.com It's available to order on their website.
at 1:12 AM No comments:

The Crafty Side of Roller Skating!!

If you follow our blog then you've seen our posts about Derby Lite San Diego roller derby inspired fitness skating. You may be wondering what is so crafty about skating? A lot! Not only can you create your own outfits, but there's a lot you can do with things like your skates and helmet to make them your own! I am a Certified Fitness Instructor for Derby Lite, with the first classes ever on the West Coast starting, so I needed a helmet redo!
If you are doing any sort of roller derby type skating, you need a helmet. Your helmet not only protects you from head injuries, but its one of the main focal points to your derby ensemble. it's the perfect accessory to use to show who you are and let your style show! So, now that I'm teaching a roller derby inspired fitness skating class, I thought I should have a new helmet, or at least a restyled one! What to do? I've always loved metal flake paint and those fancy paint jobs on some of the classic cars, so I decided to try and duplicate that on my helmet. I know I could go to an auto paint shop and have the metal flake done there, but I decided to see what my options were for a DIY job. I found a few tutorials for various ways of getting a glittery effect. One tute looked time consuming, but it had, by far, the nicest finished product of all that I had seen. The resin really brought out the shimmer of the glitter. I found the one for me!! I had a couple of weeks before my classes were to begin, so I bought my supplies and got started!

Here's the tutorial that I found on YouTube.
Materials I used:
Glitter (I chose black, fuchsia, iridescent white, gold, & pink)
Envirotex Pour On Resin (bought at Michael's with coupon)
Sponge paint brushes (small)
Disposable latex gloves
Small plastic cups for mixing resin (found these at Smart & Final)
Plastic stir sticks (the ones for stirring coffee)
Styrofoam head (or something to place your helmet on while it dries)
Masking tape
Wet/dry sandpaper
Exacto blade
Spray paint (if you are a changing the original color of your helmet)

I followed the tutorial as far as the "how-to" part goes. Tape off all the holes and use a plastic bag to cover the inside of the helmet so it doesn't get sticky from the resin. The X-acto blade is used to trim the resin from the holes once the helmet is dry. I found some nice glitter on sale at Michael's, so I picked up a bunch of colors. I hadn't decided what color I was going to go with at that point. After looking at everything for a few days I decided that I would do my everyday helmet in black and my extra helmet in red. I wear red lipstick often, so I thought it would be fun to have a matching helmet! For my black helmet I mixed several colors of glitter and then added an iridescent glitter in layers to bring out the colors underneath. The video says to do one or two coats of the resin, but I wanted a finish that really had some depth to it, so I did five each with different colors of glitter. The final layer was very thin with only a little bit of glitter mixed in. In between resin layers I used the sandpaper to smooth out any uneven spots. Be sure to wipe down the surface with a damp cloth after sanding. You don't want any residue left on the helmet.

Here's the before photo of my black helmet. Here's the after glitter version of the same helmet! It looks a lot more glittery in person, especially under the lights. The helmet stickers were added after it was completely dry. I make those to order and also customize shirts with skate names, so everything matches! I'm happy with it and will, more than likely, do my next helmet too! If you want to make a helmet for yourself & have somewhere to use it, sign up for the next Derby Lite SD Beginner session! 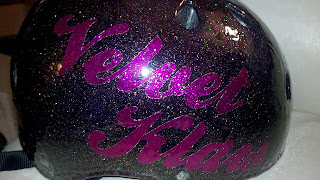 Visit us on Facebook and get all the latest info!facebook.com/DerbyLiteSanDiego
at 1:52 PM No comments:

Want to have a role in the North Park Festival of the Arts but you're not a crafty vendor? Don't worry, you can still lend a hand to making this year's celebration the best yet by volunteering. North Park could use a few good neighbors to help in both the children's art block and the craft beer block.

The children's art block will feature a walk-through volcano from Bio-Easy, a planting activity from the North Park Nursery, an abstract art castle project from the Salvation Army and a craft project from the YMCA. Your help would be greatly appreciated in assisting little hands with craft projects and with general set up to make the area super fun and safe for the kids.

The grown-up side of the festival could also use a few good people (21 and up) to assist with set up, service, and clean up in the craft beer block.
Update: the Craft Beer Block needs volunteer pourers from 1:15pm-6pm. Also, there is a volunteer appreciation party afterwards with pizza and beer.

The North Park Festival of the Arts is Sunday, May 20th, 2012, from 11 AM to 6 PM. Volunteers may be asked to come in before the fair starts or stay afterwards to assist with setting up and taking down the various canopies, tables, and decorations. If you are willing to offer a few hours of your time to make this a great event for the community, then contact Amy via email at: amy@northparkmainstreet.com

The Craft Mafia divas are planning some great crafty fun and prizes for our section of the fair. We are still seeking handmade vendors to add to our line-up. If you are interested, please sign up for our vendor newsletter here.

We hope you will come out and celebrate the best of North Park & San Diego's arts, handcrafts, music, dance, food and drink with us on May 20th.

Photo from the North Park News

Ever wish you had a place in your apartment for that drill press? Or longing for a table saw? What about access to the latest Adobe suite or a 6 needle embroidery machine? Your dream shop could be a short drive away at Maker Place. Located in Linda Vista at 1022 West Morena Blvd this DIY haven offers 14,000 square feet filled with everything you could need to get that project done. And you are not alone. Maker Place also offers classes at a verity of levels, from sketching to welding to laser cutting, in addition to the shop techs and online forums.

So stop by MakerPlace.com and check out the membership options and what this new San Diego installation has to offer.

Want to be kept up to date on all the latest crafty happenings? Our monthly newsletter has crafty how-to's, recipes, and a crafty calendar! Use this link to sign up and we'll email it to you every month!

NOTE - If you are a vendor who is interested in participating in our events, you must also sign up for the special "Vendor Info" newsletter that will have more information about how to sign up for shows and events!

Please visit our Facebook page for the latest event information!

For info. or press inquiries: info@sandiegonorthparkcraftmafia.com

Interested in joining the Mafia? Drop us a line and we will let you know how you can become part of the crew! Remember, you don't need to be a member to participate in our events! Want to get the latest on what the NPCM is up to? Join our mailing list today!